Turn carving the Sunday roast into an art form

Strictly not just for Sundays

The Dextrous Carving set contains all you need to reward the effort of a beautifully-cooked roast with some perfect slicing action.

This particular limited edition version replete with handles made from English Yew has a very special back story indeed.

The story begins with a very old, very beautiful Yew tree situated in a churchyard in Hampshire that happened to be growing in a dangerous spot. The Anglo American couple living next door – Susan who is English and Donald, who hailed from Massachusetts – very much loved the tree and so, when the decision was made that it needed to be chopped down, paid to have it properly felled to make sure as much of the wood could be preserved as possible.

Sadly Donald later became ill and subsequently passed away, and when Susan came to clear out his workshop, it was a previous customer of ours called Neil who suggested she get in touch as he had shown his knife to both of them and they were very taken, and she thought that was a good idea. In return for a donation to the local hospice in which Donald spent his final days, Susan gave Laurie some of the yew for him to make knife handles from. Finding good Yew is tricky, and knowing that Donald (who was an expert woodworker) had taken care of the selection, drying and storage means that we know it’s of an exceptional quality.

As a thank you to Susan, we made a handsome Carving Set with the first of the yew – it seemed only fitting that Donald’s memory would live on in such a celebratory, timeless way.

Our Extreme Slicer was originally designed by a chef to use at his carving station, and the design and materials conspire to create a beautifully graceful carving action.

Our curved Carving Fork has been designed to make it possible to hold it in either a fist or conventional grip, giving you options to manoeuvre easily as you carve and serve.

A top-class honing steel is combined with a hand-turned yew handle to ensure you can easily keep your blade edge in tip top condition.

Finally, the leather butterfly wrap is made-to-order for us by the incredibly talented master saddlers at E. J. Wicks. The wrap shown here is in dark brown leather with matching stitching but a variety of suede, leather and thread options are available.

We can customise the knife engraving to anything you’d like – as ever, if you’re interested in creating a really special gift, or would like to customise any set, please get in touch. Anything is possible.

Precision engineered from the highest quality high-tech 14c28n Sandvik Swedish steel and sharpened by hand and eye for the ultimate cutting edge.

As with every Savernake knife, the Dextrous Carving Set features our trademark concave hollow grind, expertly blended into a tapering convex cutting edge. This means it is both incredibly light, and easy to hone. It also allows for smoother cutting and slicing due to reduced metal passing through the ingredient, and less sticking, due to the reduced surface contact. Quite simply, the concave hollow grind is the business. 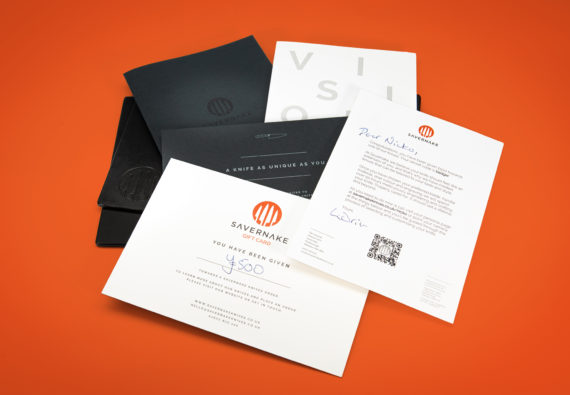 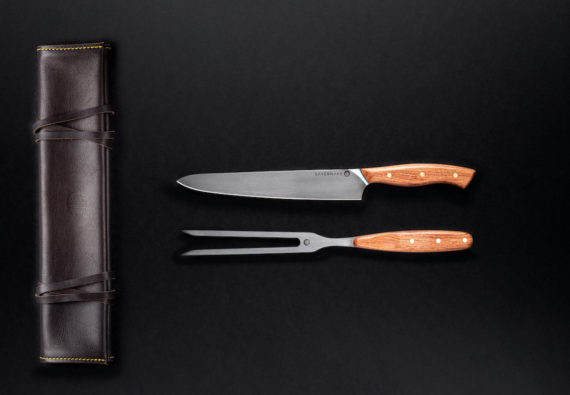 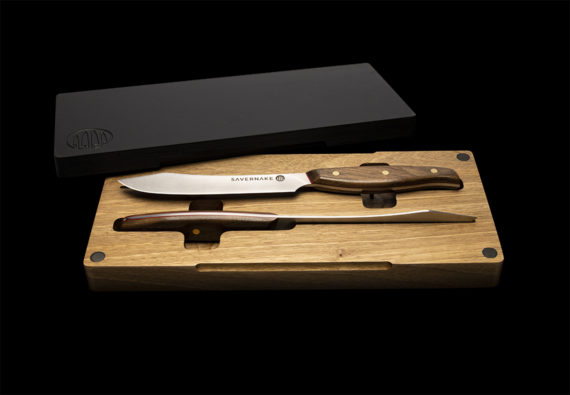