Every knife tells a story. This is ours…

At Savernake we believe in doing one thing well. For us, that thing is kitchen knives. Since opening our first workshop on the edge of the Savernake Forest in the West Country in 2016 we have been in tireless pursuit of the perfect knife, through a combination of the finest materials, modern innovations and traditional craft.

“The customers who really intrigue me are those who cook for their families day in, day out, who use a knife three times a day and have no love for that knife. We want to make them a knife that they will love – that takes away the drudgery and brings back joy.”

In our endless pursuit of perfection, we have ripped up the knifemaking rule book.

We started at the chopping board and worked back, asking ourselves what makes the cleanest, most graceful cut? What fits just so in the hand? What turns any ingredient to butter? What makes service or dinner party prep fly by, yet will last a lifetime in the kitchen? What does every cook or chef need to best express their creativity, nourish their loved ones and excel in their careers? We are always asking ourselves those questions and many more. Always innovating and always pushing our processes forward. Taking one of mankind’s oldest crafts, and bringing it into the 21st century. 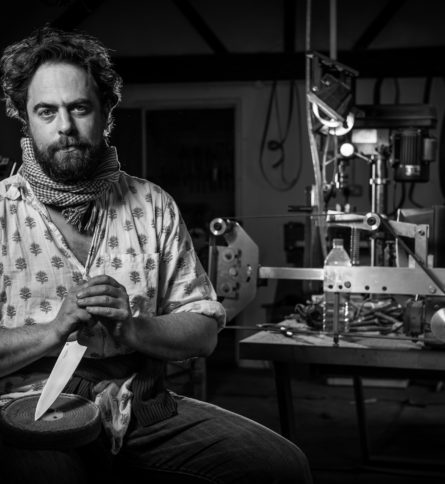 After a peripatetic existence, Laurie came back to England in 2014 and began Savernake Knives as a distraction from developing a system for the meaningful display of quantitative information.

A slightly unusual career trajectory began with five years as an officer in the Scots Guards, three of them spent in Ulster at the tail end of the Troubles. The next decade or so saw him variously setting up emergency relief programmes in southern Sudan and Ethiopia, clearing landmines for the HALO Trust in Mozambique, Afghanistan and Cambodia, studying at the University of Cape Town, looking for gold in Liberia and running a power station in Nairobi along with other little exploits over much of sub-Saharan Africa.

He now lives off the grid in the middle of the Savernake forest with his wife and two sons. 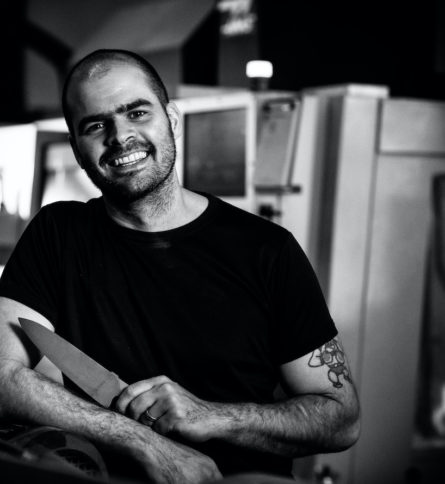 Having started out as a tool maker, Chris went on to forge a successful career in Formula 1 production engineering, focusing on manufacturing methods and new technologies. Despite a lot of coercion on our part, he still refuses to spill the beans on which race teams he worked with, citing various non-disclosure agreements and our lack of security clearance.

Chris joined us in September 2018 as our head of manufacturing, in charge of our CAM programming and running our metalwork mill. He’s also developing his skills as a knife designer under Laurie’s expert tuition.

When not working at the micron scale you’ll find Chris perfecting his monkey style moves as a keen martial arts practitioner or training as a ninja warrior. 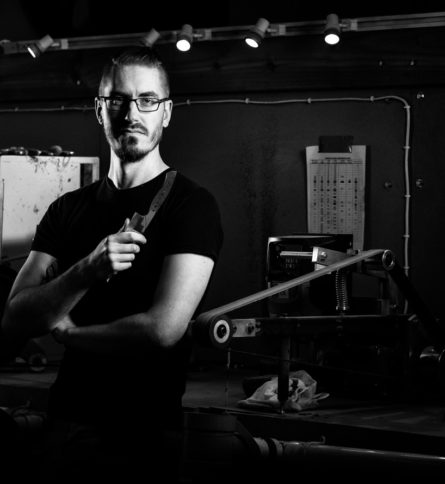 Ben joined Savernake in November 2018 from a background in banking technology. As our deputy head of manufacturing he’s now in charge of CNC routing and making our accessories and knives from the early production phases through to handle shaping, sharpening and everything in between. As our resident IT geek, Ben’s only rival when it comes to having more computer screens on his desk is Laurie.

When not crafting honing steels, chopping boards or knives, you’ll usually find ardent death metal fan Ben thrashing away at one of his local gigs, strumming on one of his (many) guitars or getting to grips with his low and slow barbecuing technique. 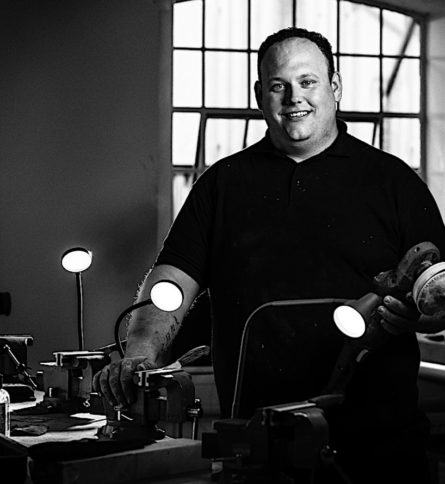 A trained butcher in his pre-Savernake days, Wayne joined Savernake in 2019 and now spends his time lovingly designing and sculpting our custom and bespoke handles for our knives and steels, here in our workshop in Wiltshire.

Whether he’s layering up G. F Smith paper ready for one of our paper or paper and wood veneer handles or turning a matching honing steel handle, the pride Wayne gets from a finished knife or accessory is unparalleled.

In his spare time, gentle giant Wayne still enjoys honing his butchery skills and has most recently been teaching fellow knife maker Ben how to butcher game, amongst other things. 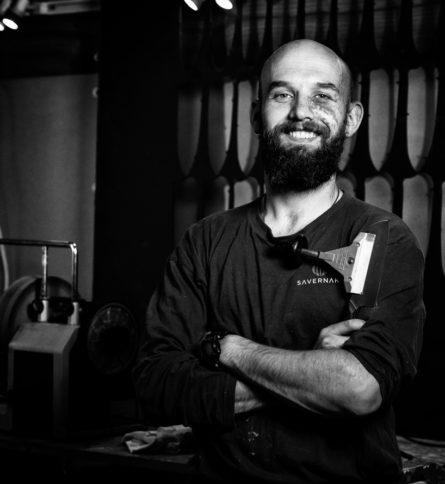 After time in recovery from long-term illness, lots of driving his beloved camper and making broth during ‘windswept and interesting’ nights in his caravan on the Cornish coast, Richy joined Laurie as knifemaker at Savernake Knives in 2018.

His preceding career as a Royal Marine Commando saw him serve in multiple environments and roles; from the arctic circle to the desert; from Professional Driver of dignitaries to Commando and Specialist Weapons Training, supporting UK Special Forces, instructing new recruits and active duty in Afghanistan.

When Richy is not in the workshop insisting on excellence with un-relenting attention to detail, he spends time as a Semi-Professional Singer/Songwriter, Painter, Poet, Supporter of fellow Veterans and keen advocate of Mental Health in the UK. He now lives… somewhere…on a narrowboat. 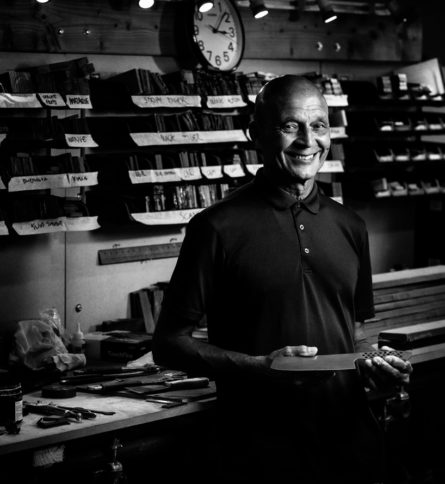 Having officially retired in 2018, Nigel was rescued from boredom and recruited to the Savernake ranks on a part-time basis by none other than his son Chris.

Now responsible for all the manual metallic processes after milling but prior to fitting handles to our knives, Nigel’s legendary attention to detail and unflappable nature is also reflected on the golf course where you’ll find him playing off a 14 handicap twice a week.

Possibly one of the fittest members of our team, Nigel was a former amateur boxer, martial arts practitioner and multiple trophy-winning local footballer in his younger years. He’s now a proud father, stepdad, grandfather and by default, surrogate pappy to the Savernake team. 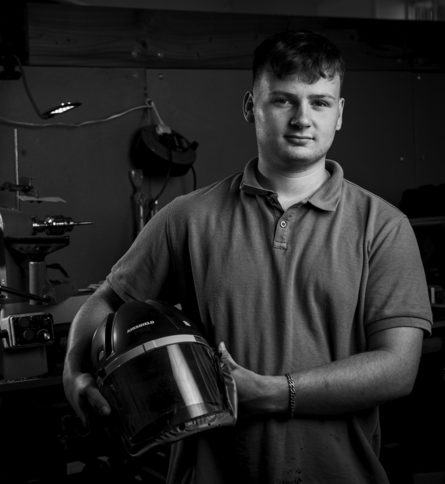 Our newest (and youngest) member of the team, Oscar has taken to the job of ‘clucking’ (the name we give the job of finishing) our knives like the veritable duck to water.

Having not particularly enjoyed academia, Oscar soon discovered that he far preferred making things with his hands to poring over text books and his natural aptitude for knife making is clearly evidenced in the superb level of finishing we’re now achieving on our handles in particular.

A former motorcross competitor, Oscar is a self-professed petrol head who even enjoys his daily commute to and from Savernake… 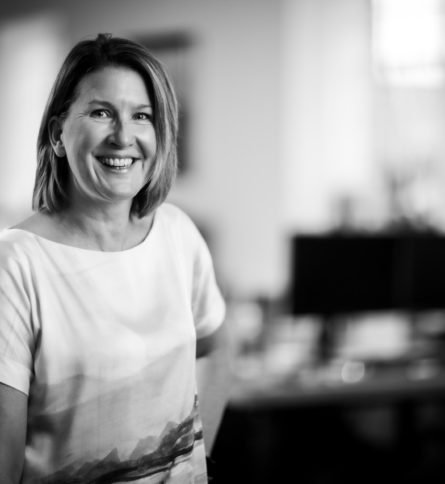 With an eclectic background including a stint as a professional yachtswoman notching up 45,000 sea miles, two Atlantic crossings and an 8,500 mile odyssey around the Med on a privately owned superyacht, Zoë has now turned her experience of launching and growing start up businesses to marketing our knives and devising fiendishly exciting collaborations with chefs and celebrities.

Zoë’s lifelong passion for food and obsession with cookery books has resulted in her catering for guests at sea and on terra firma, including hosting pop-up feast nights for her local village.

When not in the kitchen or walking her two energetic cockapoos, you’ll find Zoë concocting ever more fantastical ideas for knife designs for Laurie and the team to skilfully bring to life so she can post them to the Savernake Instagram page.

A Passion for Perfection

Our Savernake team may all come from vastly different backgrounds but they share one thing in common – an absolute obsession with detail and making sure every single knife is meticulously made and individually inspected before being allowed to leave our Wiltshire workshop.

If you share that same passion for perfection and harbour a secret desire to make or market some of the finest knives in the world, why not drop us a line to see if we have any opportunities for you to come and work with us.

“I can honestly say from start to finish the customer service from you guys really was first class, my journey started on the 16th of May – by far the longest 6 weeks of my life waiting for these babies to be made but once I got my order – I’ve never been more in love with the tools of my trade.”

Some of the things people are saying about us

Only the finest will do

What makes a Savernake Knife: The art of the craft

The result of 50+ hours of expert work, every Savernake knife is created to order in our West Country workshop. We combine state-of-the-art engineering with time-honoured hand techniques, taking one of the oldest crafts known to mankind, and reimagining it for the 21st century. Read on to discover how we make our knives…

How we make our knives